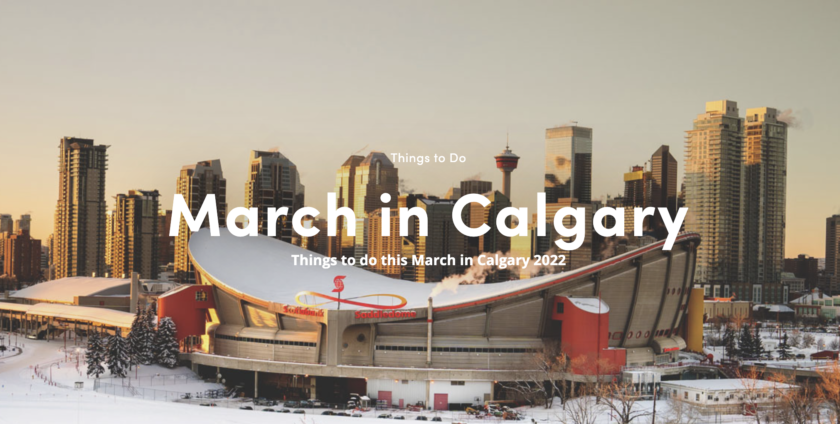 Make the final days of winter weather count with the best things to see and do this March in Calgary. Enjoy music, art, and beer with the return of Big Winter Classic, celebrate the music of David Bowie with PHI by Alberta Ballet, and catch live sports action with the Basketball Champions League of the Americas at WinSport. It’s also your last chance for the WinSport Tube Park, Ice Bikes at Bowness Park, and the Penguin Walk at the Calgary Zoo.

The Schipp’s Creek Calgary Dinner Show is perfect for fans of the hit television series with the unique entertainment and dining experience at Jubilations Dinner Theatre.

Basketball Champions League of the Americas

The Basketball Champions League of the Americas comes to Canada for the first time at WinSport Arena for a tournament featuring the 2021 CEBL Champion Edmonton Stingers and NBA veterans J.J. Barea and Michael Beasley. Single game tickets and tournament packs are now available, March 14-16, 2022.

Screwball Comedy is an homage to the zany screwball comedies of the 1930s, with snappy dialogue, outrageous characters, and humour, at Stage West Theatre Restaurants.

Make the most of spring break with these family friendly activities and events happening this March in Calgary.

Check out the Top 14 Attractions in Calgary for Families.

Alberta Theatre Projects presents Alberta Kitchen Party, a spirited celebration of the journey each artist takes to a life on the stage in this world premiere.

Dinner & A Movie: The Greatest Showman

Heritage Park presents Dinner & A Movie with a custom menu followed by a screening of The Greatest Showman in the atrium of Gasoline Alley.

Canadian guitarist Colin James takes the stage at the Southern Alberta Jubilee Auditorium for an electrifying stage performance in Calgary.

Discover the newest way to enjoy outdoor skating with Ice Bikes at Bowness Park. Ice bikes are a safe, stable, and fun way to get on the ice. Bicycles are available for rent on location with the front wheel replaced by skates. Get on, pedal, and steer.

When: Friday – Sunday until mid-March

Celebrating some of the greatest jazz musicians of all time, Jazz at Lincoln Centre: Songs We Love features an unforgettable performance live on the Jack Singer Concert Hall stage.

The King Eddy welcomes soul-roots songstress Jess Knights for a night of alt-country and soul inspired songs. The show starts at 8:30 p.m. and there is no cover.

Get ready for International Women’s Day with the Women’s History Walking Tour at Fort Calgary. Tickets include admission to the museum before and after the tour.

The Caboose Who Got Loose

The beloved children’s story of The Caboose Who Got Loose comes to life in this world premiere set to new music by Canadian composer Scott Good, and presented by the Calgary Philharmonic Orchestra.

Theatre Calgary presents Steel Magnolias, a much-loved hit play featuring six amazing women and their journey of friendship, community. and the power of the human spirit.

Get a front row seat to the world premiere of PHI, featuring the music of David Bowie, presented by Alberta Ballet. Six world-class designers and 13 monumental compositions inspired by the legendary career of David Bowie come together for an unforgettable night of live ballet.

Country music is back at the Big Four Roadhouse with Brett Kissel and special guests Jess Moskaluke and Tyler Joe Miller for a night of live music from this Juno-winning trio.

When: Daily until mid-March

Sled Island and the Palomino Smokehouse present garage rock band Peach Kelli Pop and surf rock quartet The Surfrajettes along with local talent. Tickets are $20.00 in advance with doors opening at 8:00 p.m.

Everyone’s favourite “clown in a gown” returns to the stage with Bianca Del Rio: Unsanitized, the new comedy tour with more attitude than ever.

Learn and understand aspects of the historical context and realities of contemporary Indigenous interaction in Canada with Bruce and Deanna Starlight of the Tsuut’ina Nation with Introduction to Indigenous Interaction at Fort Calgary.

Heritage Park presents Dinner & A Movie with a custom menu followed by a screening of Brooklyn in the atrium of Gasoline Alley.

Celebrate St. Paddy’s Day with Pub Quiz at the Calgary Zoo and enjoy dinner, drinks, live quiz rounds, and prizes for a fun adults only night out.

Where: Safari Lodge at the Calgary Zoo

Visit Glenbow at The Edison

Visit Glenbow at The Edison for in-person art experiences at this new satellite location. Free admission for everyone provided by the Calgary Downtown Association.

Foreigner – The Hits On Tour

Live Music at The Palace Theatre

Live music is back a The Palace Theatre, including performances by The Darkness (March 22), Death From Above 1979 (March 23), and James Vincent McMorrow (March 25), this March in Calgary.

Where: The Palace Theatre

Celebrate Calgary this winter with the Big Winter Classic, a festival of local art, music, and beer at venues like Broken City, Last Best Brewing, Inner City, GOAT, Commonwealth, and Marriott Calgary Downtown/Beltline District. Check out the schedule and get your tickets now.

One Yellow Rabbit’s High Performance Rodeo is back with a series of seven productions for a one-time-only special spring edition.

Take a ride down one of the fastest tube parks in Western Canada with the Tube Park at WinSport. The tube park is located on the main hill with eight lanes and a magic carpet to bring you to the top.

When: Open weekends and holidays

Heritage Park presents Dinner & A Movie with a custom menu followed by a screening of Slumdog Millionaire in the atrium of Gasoline Alley.

The Calgary International Salsa Congress is the hottest dance show of the year, featuring the best salsa dancers in the world, local professionals, and troupes from all over North America. Get your tickets now for this spectacular salsa showcase in the Imperial Ballroom.